(Cornerstone of the Human Diet) 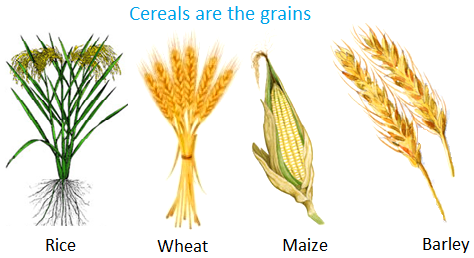 For thousands of years grains have been the cornerstone of the human diet. Early civilizations believed that grains were so important that each particular grain was said to be a gift from the gods. Grains were found in the tombs of Egyptian pyramids.

Myths and legends throughout different global cultures sang of the importance of grains. The god, Demeter, gave wheat to the Greeks; in Egypt, the god, Ra, gave his people grains; the Aztecs gave thanks to their corn goddess with amaranth grain products.

Cultivation of weeds and grasses were occurring in fertile regions of the Middle East over 10,500 years ago. That’s where wheat and barley made their debut. About 1,000 years later in China, rice and millet were cultivated from wild grasses, and during this same period in Central America, corn was cultivated.

Today, nutrition experts recognize whole grain foods as key sources of health-promoting substances such as phytochemicals and nutrients including fiber, minerals, protein, and certain vitamins. Packed with a nutty flavor and affordability, these low fat foods are a culinary jewel. Today, agriculture has been refined, resulting in the domestication of grains and crops, and offering mankind a wide variety of different grains.

Wheat – Was discovered in the ancient civilization of Iraq, dating back to 6500 B.C. In the 12th Century wheat made its way to England, and came to the New World with Columbus. Later, the pilgrims shared their wheat with Native Americans who were already growing corn. Wheat cultivation has spread all over the world, and is produced today in more quantities than any other grain.

Rice – Its origins date back to 3500 B.C. in Thailand. Around the 12th Century rice found its way to Europe, and then arrived in America, specifically South Carolina, in the late 1690’s. Today a variety of rices are cultivated. The choices are endless - brown, basmati brown, yellow, wild, black, arborio, jasmine and plain white rice. Arsenic levels in rice are well noted. Researchers encourage folks to purchase organic rice.

Oats – Dating back to Germany in 1000 B.C., this grain’s popularity lagged behind others. People thought it had a bland taste and that it was more suited to feeding animals than humans. However, in the mid 1800’s oats were elevated to ‘health food’ status as research suggesting that a substance in it prevented heart disease. (We know its fiber benefits!) Despite this, most of the oats produced in North America are still used to for animal food.

AMARANTH – An ancient grain cultivated by the Incas. It was also widely used in China and in South and Central America. A tiny grain, it is high in lysine, elevating its value as a rich protein source. With its strong, earthy, nutty and sweet flavor, it can be used in baking or as a breakfast cereal.

To cook: Bring 1 cup of grain and 2 ½ cups of water to a boil. Simmer for 20 minutes. It cooks in the same amount of time as bulgur and quinoa. Will make 2 cups of cooked grain.

BARLEY – Full of flavor and chewy to taste, barley can be used in soups, stews, pilafs, and salads or as a breakfast cereal. Pearl barley is less nutritious than unrefined whole barley.

To cook: Bring 1 cup hulled barley and 3 cups water to a boil. Simmer for 1 hour, 15 minutes. Drain, if necessary. It should make about 3 ½ cups of cooked barley. (Do not Pressure Cook!)

BUCKWHEAT (Also known as KASHA) - A traditional ingredient in eastern Europe, buckwheat groats or kasha, as they are called when cooked, are rich in protein with a nutty, earthy flavor. Good in pilafs with nuts and raisins.

To cook: To make 2 cups of cooked kasha, use 2 cups of water to 1 cup of grain. Bring to a boil, cover and simmer for 15 to 20 minutes. Do not Pressure Cook!

BULGUR – It is sometimes referred to as ‘cracked wheat’. The grain comes in either small, medium, or coarse grinds. Great in Mediterranean and Middle Eastern meals. Full of fiber, bulgur has a nutty flavor and fluffy texture when cooked. It is main ingredient in tabbouleh salad.

To cook: Use 1 cup of grain to 2 cups of water. Boil the water. Pour boiling water over the grains. Cover well and let sit for 30 minutes off the heat. Fluff with a fork and it's ready to eat. So easy to cook! Bulgur is nice as a breakfast porridge. I enjoy simmering cooked bulgur in a little veggie broth, add some scallions, grated garlic and ginger, add a little tamari, and walla, a nice luncheon side dish. Do not Pressure Cook!

CORN – In reality, corn is a grain, though it is more often treated as a vegetable. It can be ground into different textures – cornmeal or grits. Its uses are varied: in baked goods, to make cornbread, porridge and polenta.

COUSCOUS - Though it’s usually called a grain, couscous is actually a tiny pasta made from semolina wheat. A staple of Africa and used in Middle Eastern cooking, couscous has a neutral taste and fluffy texture. Goes great with stewed vegetables. Chickpeas and raisins are often added to couscous sauces. A light seasoning of ground coriander, paprika and cumin spices couscous quite well. In the U.S. almost all couscous is precooked.

To cook: 1 cup couscous to 2 cups water. Bring to boil, simmer for 2 minutes. Then take off heat. Let grain sit, covered, for 10 minutes. Fluff with fork before serving. Do not Pressure Cook!

FARRO - is an ancient grain that has its origins in the Fertile Crescent. Found in the grains of Egyptian kings, the grain was said to have fed the Roman legions before battle. Farro is also a favorite among Italians, having been consumed for centuries. Its popularity is only now moving to the U.S. Farro is actually three grains: farro piccolo (einkorn), farro medio (emmer), and farro grande (spelt).  Emmer is what is sold most often in the U.S. There's also whole farro, semi-pearled, and pearled. The semi-pearled and pearled take about 25 minutes to cook whereas the whole farro should be soaked overnight to reduce cooking time which is about 30 - 40 minutes. Farro can be added to soups and stews, or as a topping on salads.

To cook:  1 cup of farro, cover with water, bring to boil, and simmer for 25 minutes till tender.

KAMUT –This ancient member of the wheat family had its origins in Egypt. The grains are large, chewy and dense when cooked. With a long cooking time it is best to soak overnight to reduce its cooking time.

MILLET – One of the oldest grains in existence, millet has been popular for thousands of years. It exists in some form on every continent. Millet is very nutritious; high in protein, rich in iron, calcium, B vitamins and potassium- a super, healthy food! It is highly digestible, cooks fairly quickly and works very well in stuffings, pilaf, and patties. Can also be used as a breakfast cereal, with some cinnamon and raisins.

OATS – Rolled, steel cut and quick cooking, oats are mainly used as a breakfast cereal. They can be ground into flour and used in baking or to give density to patties.

POLENTA – Is coarse cornmeal. Cornmeal that is organic and stone-ground can be used to make polenta. Serve polenta soft from the pot, chilled and then pan fried.

To cook: 1 cup polenta to 5 cups of water and ½ tsp salt – Bring water and salt to a boil in pot with lid. Pour the polenta in very slowly, stirring with a whisk as you pour. Lower the heat to a simmer and cook for 12 to 15 minutes, stirring often. Turn off the heat and cover for 10 minutes, stirring occasionally.  Do not Pressure Cook!

QUINOA – Known as the ‘mother grain’, it has been cultivated in the Andes region of South America for thousands of years. It was the mainstay of the Inca civilization. The grain with the most protein, it also has a great balance of amino acids, contains calcium, B vitamins, E, and iron. It cooks quickly, is light in texture and has a nutty flavor. Great in pilafs, salads, stuffings, puddings and even used to make burgers. Versatility is its second name!

To cook: 1 cup quinoa to 2 cups of water. Boil, then simmer for 15 minutes. This makes 4 cups of cooked quinoa. Do not Pressure Cook!

SPELT – Is one of the oldest cultivated grains. It’s related to wheat and often referred to as ‘farro’. With a mild, nutty flavor, it is well tolerated by people with wheat allergies. Because of its large size and long cooking time, it benefits from overnight soaking.

TEFF – This is a very, very small grain! When cooked, it has a sweet flavor and a somewhat gelatinous consistency. Best used in puddings and baked goods. The Ethiopian flatbread called injera is made with teff.