Life is filled with surprises, and many knocked at my door in 2006. It all began with my annual physical. Back then I believed my health was excellent. I ate well, exercised regularly, and kept up with the latest health information. Fish, poultry, and lean pork were my 'go-to' protein sources, save a twice yearly filet mignon indulgence. However, my yearly lab results with a physician new to my internal medical group were shocking and dismaying. Talk about pride coming before the fall! My LDL's (bad cholesterol) had skyrocketed to 179, and my cholesterol was 246. I felt baffled. How could this be? Wasn't I eating the right foods? Right then and there the myths and illusions of the Standard American Diet (SAD!!) oozed like a bloody, marbled rib-eye. 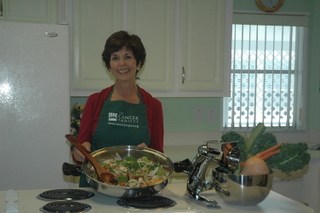 My wise, plant based physician opened my eyes to the current findings on the relationship between nutrition and disease. He asked if I’d be willing to give up beef, pork, lamb and dairy. Since I was adamant about not taking statins and remaining free of the pharmaceutical stranglehold, I agreed. (Initially, family and some friends thought I jumped off a cliff! And I did!)

I read "The China Study", considered the Grand Prix of Epidemiology by the esteemed bio-chemical researcher, Colin Campbell, Ph.D. His twenty year plus research project was conducted among Cornell University, Oxford in England and the Chinese Academy for Preventative Medicine. After absorbing this definitive, scientific body of evidence, I couldn’t go back to the toxic American diet. One door closed, but new doors kept opening.

The saying – When the student is ready, the teacher appears – rang true. Numerous teachers, in various forms, entered my world. The writings and research of Drs. John McDougall, Caldwell Esselstyn, Neal Barnard, Joel Fuhrman, Michael Greger and Dean Ornish, Michael Klaper, along with Colin Campbell, Ph.D. and Jeff Novick, Ph.D. transformed my understanding of nutrition. Plant based cookbooks replaced what were once the old stand-byes. New information was absorbed with the zest and tenacity of my student days. My kitchen became my laboratory. New recipes were tried, tested, rated, and relished. 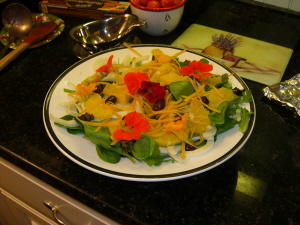 After four months of total plant based eating my LDL’s plummeted below 100 and cholesterol dropped into the 170's. But I experienced another unexpected surprise.

Since 1999 I’d been experiencing progressive arthritic pain and discomfort in my right wrist. At times the pain would awaken me in the middle of the night. Once, after extensive computer work, my hand froze. The pain was excruciating and my wrist had to be braced. I wondered if my gardening days were coming to a close, and questioned if I’d be able to pick up my grandchildren with ease. A friend whined, “Arthritis is what happens when you get old.” I wasn’t buying that!

Gradually, over those four months the arthritis surprisingly vanished. I’d be working in the kitchen, dicing and chopping, and suddenly realize that my wrist wasn’t hurting. No more pain wakened me in the middle of the night! No more pain resulted from driving long distances! And no more pain from keying on the computer! I felt overjoyed. I celebrated by raking leaves for two days, painting my kitchen, and shaking my wrist in complete abandon! For me it was another tangible affirmation that ‘we are what we eat’.

I began offering private plant based cooking classes in my home after a reporter did a story on my health transformation. Connecting with angels along the way, I was accepted into the Food for Life certification program with Physicians Committee for Responsible Medicine in Washington, D.C. in 2008. I continued my studies via the Nutrition Studies Program at eCornell, and received certification in 2010 as a Plant Based Educator/Consultant. Since 2008 I've been teaching Food for Life classes both on Cape Cod, which is home, and in Naples, Florida during winter. Classes are offered in various venues - hospitals, cancer centers, senior centers, churches, homes, etc. I also offer private, small group classes in my home.

In the final analysis, my life's work of teaching, counseling and social work has culminated in teaching, sharing, and listening to folks who seek to take charge of their health, and who need support along the journey. The hundreds of people I've met, and those who have shared their incredible health transformations are what keep me going. It's gift to walk with others.